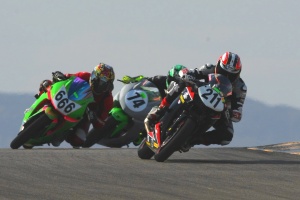 The March round at Chuckwalla Valley Raceway was the most successful event yet for Werkstatt racer Ari Henning and his Honda CBR250R. Henning took three wins and a second, and set a new 250 track record (for the clockwise direction of the 2.68-mile circuit) in the process. His best lap of 2.02.675 was 0.10 seconds quicker than the previous record set in January.

CVMA runs qualifying after morning practice on Saturday, and Ari turned a good time, landing himself a front row position in an all-Ninja grid of over 20 bikes. Solid starts and a short sprint to Turn 1 insured Henning never dropped below third place, and during Saturday’s races he quickly made his way to first place and took the win in both 250

Supersport and Ultra Lightweight Shootout.
“I ran on old tires for practice and qualifying, but put fresh rubber on for the races,” says Ari. “Unfortunately, I didn’t get my hot pressures set, and after lap two both ends overheated and started losing grip and causing pretty severe chatter.” Despite slipping and sliding through the corners and even running off track twice, Ari charged to the front to take the win. “I set the lap record in that race, which was pretty amazing considering the tire issues. I was frustrated and mad after I ran off the track, so I guess that must have helped!”

With his hot pressures properly set and some minor suspension changes, Henning had much better traction for Saturday’s second race, taking the lead early and riding to the win by a fair margin. Henning also won Sunday’s 250 Supersport race after taking the lead at the half way point.

Henning and Ninja-mounted rider Josh Fogle fought hard in Sunday’s Ultra Lightweight Shootout race, changing positions frequently. “Same old story – he’d pass me on the straights and I’d ride like hell to get around him in the corners,” recounts Henning. “The wind picked up quite a bit during the afternoon, and it was wrecking my drafts and pushing us off-line in the corners, so my strategy kind of went out the window,” says Ari. “I got up alongside Fogle in the last turn and forced myself to crack the throttle open extra early, but he motored away and won by a bikelength.”

“What a great weekend,” recalls Henning. “This is by far our best weekend yet. We made some pretty major suspension changes before this round and they paid off. I would have loved for it to have been a clean sweep, but you can’t win them all.”
Henning’s next battle against the Ninjas will take place at Sonoma Raceway with the AFM in early May. 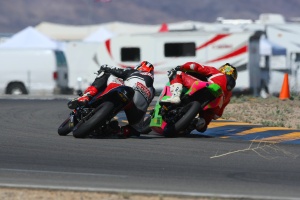 Last race, last lap, last turn. Ari managed to get up alongside race leader Josh Fogle numerous times, but failed to make a pass that lasted.

Henning’s lone Honda slots into third place going in to Turn 1 during Saturday’s Ultra Lightweight Shootout race. Henning would go on to win the race after taking the lead on lap four.

A beveled boot, worn knee slider, and scuffed muffler are testament to how hard Ari rides the little Honda in the corners.